Pope Francis continues to emphasize the themes that he expressed as dear to him from the beginning of his pontificate. We must go back to his famous pre conclave speech that according to some won over at that very moment, the respect of fellow elector Cardinals. For the full copy of his speech see Magister’s article here. The central idea and diagnosis of the Pope: Spiritual Worldliness. A concept inherited by Pope Francis from French Cardinal, Henri de Lubac. Recently the Pope has been developing what spiritual worldliness means, in different instances.

1. First in this speech where he reflects on the young rich man (Mark 10), and the dangers of wealth. Here he lambasted the idea that economic wellbeing is the point of the Catholic spirit :

And the Pope focused on what he called two “cultural riches”: the first, a “culture of economic wellbeing that causes us to be lacking in courage, makes us lazy, makes us selfish”. Wellbeing, he said, “anaesthetizes us, it’s an anaesthetic”.
“No, no, not more than one child, because otherwise we will not be able to go on holiday, we will not be able to go out, we will not be able to buy a house. It’s all very well to follow the Lord, but only up to a certain point. This is what economic wellbeing does to us: we all know what wellbeing is, but it deprives us of courage, of the courage we need to get close to Jesus. This is the first richness of the culture of today, the culture of economic wellbeing”.There is also, he added, “another richness in our culture”, another richness that prevents us from getting close to Jesus: it’s our fascination for the temporary”. We, he observed, are “in love with the provisional”. We don’t like Jesus’s “definitive proposals”. Instead we like what is temporary because “we are afraid of God’s time” which is definitive.

“He is the Lord of time; we are the masters of the moment. Why? Because we are in command of the moment: I will follow the Lord up to this point, and then I will see… I heard of a man who wanted to become a priest – but only for ten years, not any longer…” Attraction for the provisional: this is a richness. We want to become masters of time, we live for the moment. These two riches are the ones that, in this moment, prevent us from going forward. I think of so many men and women who have left their land to work throughout their lives as missionaries: that is definitive!”.
And, he said, I also think of so many men and women who “have left their homes to commit to a lifelong marriage”, that is “to follow Jesus closely! It’s the definitive”. The temporary, Pope Francis stressed, “is not following Jesus”, it’s “our territory”.

2. Second is another homily which challenges a worldly careerism in the Church (more recently he told priests in diplomatic school who chose promotion: “don’t be ridiculous”) This homily contains an explanation of spiritual worldliness as it tries to remove Jesus from the love and good works of Christians. To describe it, he uses the contrasting example of Mother Teresa, spoken of before here and here. 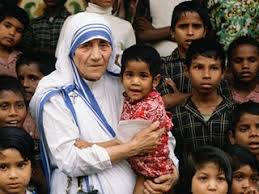 “You cannot remove the Cross from the path of Jesus, it is always there.” Yet, Pope Francis warned, this does not mean that Christians must hurt themselves. The Christian “follows Jesus out of love and when you follow Jesus out of love, the devil’s envy does many things.” The “spirit of the world will not tolerate this, does not tolerate this witness”:
“Think of Mother Teresa: what does the spirit of the world say of Mother Teresa? ‘Ah, Blessed Teresa is a beautiful woman, she did a lot of good things for others …’. The spirit of the world never says that the Blessed Teresa spent, every day, many hours, in adoration … Never! It reduces Christian activity to doing social good. As if Christian life was a gloss, a veneer of Christianity. The proclamation of Jesus is not a veneer: the proclamation of Jesus goes straight to the bones, heart, goes deep within and change us. And the spirit of the world does not tolerate it, will not tolerate it, and therefore, there is persecution. “

3. Finally, is the message of Pentecost to religious movements in the Church, the most thorough diagnosis of spiritual worldliness so far. In this speech he also speaks briefly of a ‘culture of waste’ which will be the central theme of his address on the environment which I will post tomorrow. These ideas had already been developed by Cardinal Bergoglio in Argentina. For now, his spiritual bazooka:

At this time of crisis we cannot be concerned solely with ourselves, withdrawing into loneliness, discouragement and a sense of powerlessness in the face of problems. Please do not withdraw into yourselves! This is a danger: we shut ourselves up in the parish, with our friends, within the movement, with the like-minded… but do you know what happens? When the Church becomes closed, she becomes an ailing Church, she falls ill! That is a danger. Nevertheless we lock ourselves up in our parish, among our friends, in our movement, with people who think as we do… but do you know what happens? When the Church is closed, she falls sick, she falls sick. Think of a room that has been closed for a year. When you go into it there is a smell of damp, many things are wrong with it. A Church closed in on herself is the same, a sick Church.

The Church must step outside herself. To go where? To the outskirts of existence, whatever they may be, but she must step out. Jesus tells us: “Go into all the world! Go! Preach! Bear witness to the Gospel!” (cf. Mk 16:15). But what happens if we step outside ourselves? The same as can happen to anyone who comes out of the house and onto the street: an accident. But I tell you, I far prefer a Church that has had a few accidents to a Church that has fallen sick from being closed.

However there is one problem that can afflict Christians: the spirit of the world, the worldly spirit, spiritual worldliness. This leads to self-sufficiency, to living by the spirit of the world rather than by the spirit of Jesus…. The Church is neither a political movement nor a well-organized structure. That is not what she is. We are not an NGO, and when the Church becomes an NGO she loses her salt, she has no savour, she is only an empty organization.

We need cunning here, because the devil deceives us and we risk falling into the trap of hyper-efficiency. Preaching Jesus is one thing; attaining goals, being efficient is another. No, efficiency is a different value. Basically the value of the Church is living by the Gospel and witnessing to our faith. The Church is the salt of the earth, she is the light of the world. She is called to make present in society the leaven of the Kingdom of God and she does this primarily with her witness, the witness of brotherly love, of solidarity and of sharing with others. When you hear people saying that solidarity is not a value but a “primary attitude” to be got rid of… this will not do! They are thinking of an efficiency that is purely worldly.

One thought on “The Spirit of the World, Pope Francis and Mother Teresa”