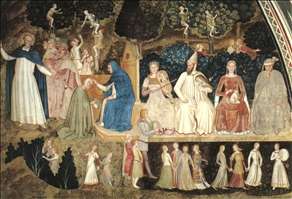 Last week I had an interesting conversation with a person about religions, Catholicism and the question of salvation. She shared that she was brought up Catholic but converted to Judaism at age 14 after deciding that she did not want to be confirmed. Her Catholic formation was very mediocre and faith did not make sense to her, but going to the origins of it all and having no mediator made more sense. Her continual issue was that her Catholic family thought ‘she was condemned to hell’. Is that really what the Catholic Church says? Let’s look at a key passage in Vatican II, Lumen Gentium 16:

Nor is God far distant from those who in shadows and images seek the unknown God, for it is He who gives to all men life and breath and all things,(127) and as Saviour wills that all men be saved.(128) Those also can attain to salvation who through no fault of their own do not know the Gospel of Christ or His Church, yet sincerely seek God and moved by grace strive by their deeds to do His will as it is known to them through the dictates of conscience.(19*) Nor does Divine Providence deny the helps necessary for salvation to those who, without blame on their part, have not yet arrived at an explicit knowledge of God and with His grace strive to live a good life.”

“He is not saved, however, who, though part of the body of the Church, does not persevere in charity. He remains indeed in the bosom of the Church, but, as it were, only in a “bodily” manner and not “in his heart.”(12*) All the Church’s children should remember that their exalted status is to be attributed not to their own merits but to the special grace of Christ. If they fail moreover to respond to that grace in thought, word and deed, not only shall they not be saved but they will be the more severely judged.(13*)”.

In summary, this says that the Catholic Church believes that someone who has not known Christ out of no fault of their own yet strives for the Truth and lives a moral life can be saved. In fact, Catholics who have been given the ‘fullness of means of salvation’ in the Church and do not live an authentic life of charity and love will be judged to higher standards. No Catholic has their salvation secured. What matters, following the teachings of Jesus, is what happens inside the heart of each person, that is all that really matters. Certainly, having met Christ assumes a person will want to be a member of the Church and participate fully in its life and Sacraments. But merely going through the motions, being nominally Catholic in “body” but not “in heart”, that is not living an authentic charity, leads to no guarantee of salvation.

2 thoughts on “The Question of Salvation”