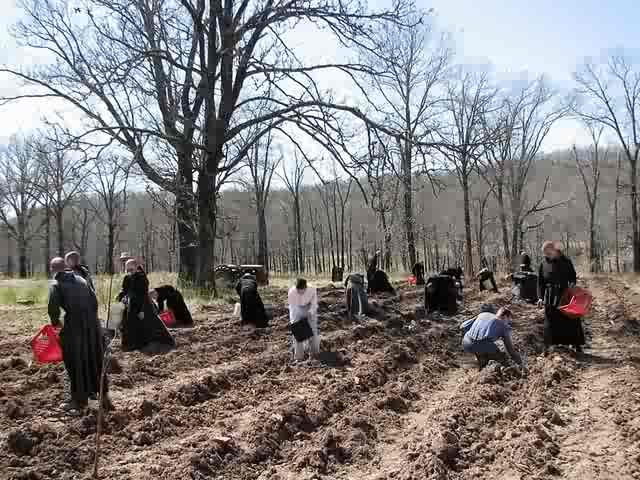 These words are from Pope Paul VI in his Apostolic Letter “Pacis Nuntius” of 1964, where he proclaimed St. Benedict as the Patron of Europe. Among the great accomplishments of the monastic movement inspired by St. Benedict was an agricultural revolution moved by a deep spiritual renewal. Prayer and work went hand in hand, and human beings were integrated with their environment, living off their own production in communities of faith. Here Pope Paul VI words on the “plow” aspect:

It was principally he and his sons, who with the cross, the book and the plow, carried Christian progress to scattered peoples from the Mediterranean to Scandinavia, from Ireland to the plains of Poland…

Lastly, it was with the plow, i.e., with the cultivation of the fields and with other similar initiatives, that he succeeded in transforming wastelands gone wild into fertile fields and gracious gardens; and by uniting prayer with manual labor, according to his famous motto “ora et labora”, he ennobled and elevated human work. Rightly, therefore, did Pius XII salute St. Benedict as the “father of Europe” (Cf. AAS loc. Mem.); for he inspired in the peoples of Europe that loving care of order and justice that forms the foundation of true society.

Key to this entire cultural revolution was the unity of Europe, forged by the plow, book and Cross. I have written on European unity here, here and here. On this aspect of unity Pope Benedict XVI spoke some words of the importance of music, and of symphony as a metaphor for world peace.

You can imagine how happy I am to receive an Orchestra such as this one, which was born from the conviction, more than that, from the experience that music unites persons, beyond any division; because music is harmony of differences, as happens every time that a concert begins with the “rite” of tuning. From the multiplicity of timbres of diverse instruments, a symphony can emerge. However, this does not happen magically or automatically! It is realized only thanks to the commitment of the Director  and of every individual musician. A patient, toilsome commitment that requires time and sacrifices, in an effort to listen to one another mutually, avoiding excessive prominence and fostering the best success of the whole.

While I express these thoughts, my mind turns to the great symphony of peace among peoples, which has never been altogether finished. My generation, as well as that of Maestro Barenboim’s parents, lived through the tragedy of World War II and the Shoa. And it is very significant that you, Maestro, after having reached the highest goals of a musician, wished to give life to a project such as the West-Eastern Divan Orchestra: a group in which Israeli, Palestinian and musicians of other Arab countries play together; persons of Jewish, Muslim and Christian religion.

listening to the Fifth and Sixth Symphonies of Ludwig van Beethoven.

Also in this choice, in this approach we can see an interesting meaning for us. These two famous Symphonies express two aspects of life: drama and peace, man’s struggle against an adverse destiny and the cheering immersion in the bucolic environment.

Beethoven worked on these two works, in particular on their completion, almost contemporaneously. So much so that they were performed for the first time together – as this evening – in the memorable concert of December 22, 1808, at Vienna. The message I would like to draw today is this: To attain peace one must be committed, leaving violence and arms to one side, committed to personal and community conversion, with dialogue, with the patient search for possible understandings

One thought on ““The Cross, the Book and the Plow””