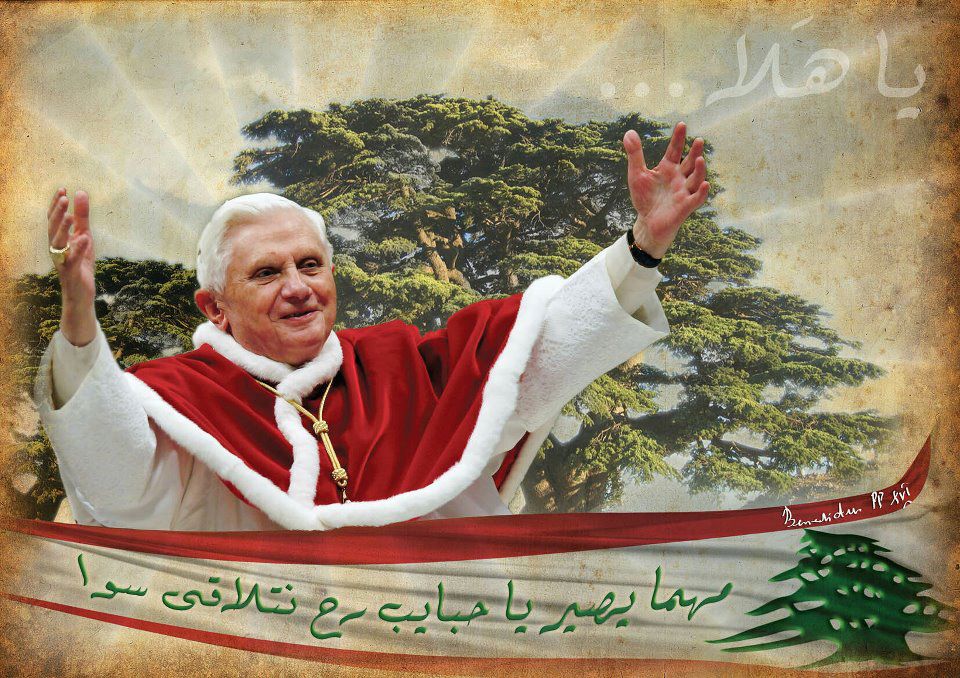 Yesterday Pope Benedict XVI delivered an address on peace, and used the cedar tree as a metaphor for communicating his key ideas. He opened the address by saying this to Lebanon’s president:

With you, I have just planted a cedar of Lebanon, the symbol of your beautiful country. In looking at this sapling, and thinking of the care which it will need in order to grow and stretch forth its majestic branches, I think of this country and its future, the Lebanese people and their hopes, and all the people of this region which seems to endure interminable birth pangs. I have asked God to bless you, to bless Lebanon and all who dwell in these lands which saw the birth of great religions and noble cultures. Why did God choose these lands? Why is their life so turbulent? God chose these lands, I think, to be an example, to bear witness before the world that every man and woman has the possibility of concretely realizing his or her longing for peace and reconciliation!

The cedar tree thus becomes not only a metaphor for Lebanon as a country but for building peace in general. The Pope emphasized how unity is essential for peace, and true unity lies in a correct vision of the human person rooted in God.

The wealth of any country is found primarily in its inhabitants. The country’s future depends on them, individually and collectively, as does its capacity to work for peace. A commitment to peace is possible only in a unified society. Unity, on the other hand, is not the same as uniformity. Social cohesion requires unstinting respect for the dignity of each person and the responsible participation of all in contributing the best of their talents and abilities. The energy needed to build and consolidate peace also demands that we constantly return to the wellsprings of our humanity. Our human dignity is inseparable from the sacredness of life as the gift of the Creator. In God’s plan, each person is unique and irreplaceable. A person comes into this world in a family, which is the first locus of humanization, and above all the first school of peace. To build peace, we need to look to the family, supporting it and facilitating its task, and in this way promoting an overall culture of life. The effectiveness of our commitment to peace depends on our understanding of human life. If we want peace, let us defend life! This approach leads us to reject not only war and terrorism, but every assault on innocent human life, on men and women as creatures willed by God. Wherever the truth of human nature is ignored or denied, it becomes impossible to respect that grammar which is the natural law inscribed in the human heart (cf. Message for the 2007 World Day of Peace, 3). The grandeur and the raison d’être of each person are found in God alone. The unconditional acknowledgement of the dignity of every human being, of each one of us, and of the sacredness of human life, is linked to the responsibility which we all have before God. We must combine our efforts, then, to develop a sound vision of man, respectful of the unity and integrity of the human person. Without this, it is impossible to build true peace.

This anthropological emphasis in turn leads to the fundamental moral questions about humanity. In the end the view we have of a human person will reflect our moral convictions, and in pluralistic contexts it is very challenging to come to consensus, let alone right answers. The emphasis on the dignity of life reminds us of Mother Teresa’s severe warning about limited views of human life, and immediately remind us that the call for peace in the MIddle East becomes pertinent to the West as well, given the challenges of pluralism and diverse, widespread and mistaken anthropological perspectives. These views in turn have a bearing on the environment since the underlying diagnosis of the Church is that the environmental crisis is a moral crisis. The environmental degradation is one of the negative consequences among many, that spring from a ruptured and imbalanced human heart and society. The allusions to these consequences were made clear in the moral dimension, as well as in the need for religious freedom:

While more evident in countries which are experiencing armed conflict – those wars so full of futility and horror – there are assaults on the integrity and the lives of individuals taking place in other countries too. Unemployment, poverty, corruption, a variety of addictions, exploitation, different forms of trafficking, and terrorism not only cause unacceptable suffering to their victims but also a great impoverishment of human potential. We run the risk of being enslaved by an economic and financial mindset which would subordinate “being” to “having”! The destruction of a single human life is a loss for humanity as a whole…A pluralistic society can only exist on the basis of mutual respect, the desire to know the other, and continuous dialogue….It cannot be forgotten that religious freedom is the basic right on which many other rights depend. The freedom to profess and practise one’s religion without danger to life and liberty must be possible to everyone. The loss or attenuation of this freedom deprives the person of his or her sacred right to a spiritually integrated life. What nowadays passes for tolerance does not eliminate cases of discrimination, and at times it even reinforces them. Without openness to transcendence, which makes it possible to find answers to their deepest questions about the meaning of life and morally upright conduct, men and women become incapable of acting justly and working for peace.

Finally, the Pope called for two main directions of peace building. First, recovering the true anthropology by seeking human values and interior longings common to all. And second by education, based on a correct anthropology. Without this inner harmony of many, the environment will continue to suffer the consequences of rupture.

In order to make possible a future of peace for coming generations, our first task is to educate for peace in order to build a culture of peace. Education, whether it takes place in the family or at school, must be primarily an education in those spiritual values which give the wisdom and traditions of each culture their ultimate meaning and power. The human spirit has an innate yearning for beauty, goodness and truth. This is a reflection of the divine, God’s mark on each person!…

2 thoughts on “The Cedar of Lebanon – Peace and Reconciliation”