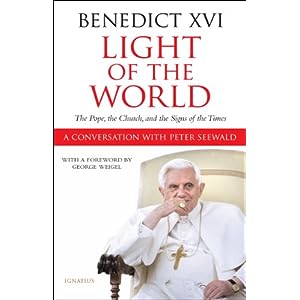 As a conclusion to the last post on the book “The Light of the World”, this is the most thought provoking passage in my opinion. Though it is not about the environment directly, I think it is a diagnostic of some roots of the environmental situation as well.

Reflecting on the visit of 3rd world Bishops, Pope  Benedict XVI mentions the absolute devastation that sex tourism and drug use, mostly from wealthier westerners, causes in poor countries. This leads him to a chilling categorization, that the “boredom of the West” is the cause of so many of the worlds problems. Living in Boulder CO, this seems to me to be strikingly true.

“This too is one of the terrible responsibilities of the West: that it uses drugs and that it thereby creates countries that have to supply it, which in the end exhausts and destroys them. A craving for happiness has developed that cannot content itself with things as they are… And then there is a further problem. The destruction that sex tourism wreaks on our young people, the bishops say, is something we cannot even begin to imagine. The destructive processes at work in that are extraordinary and are born from the arrogance and the boredom and the false freedom of the Western world.

You see, man strives for eternal joy; he would like pleasure in the extreme, would like what is eternal. But when there is no God, it is not granted to him and it cannot be. Then he himself must now create something that is fictitious, a false eternity.”

2 thoughts on “The Boredom of the West”