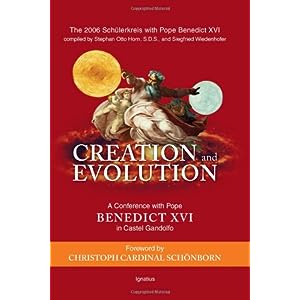 Pope Benedict XVI has launched a new foundation at the Vatican called ‘The Science and Faith Foundation’, which aims to build a philosophical bridge between faith and science. Some may be familiar with the book Creation and Evolution, with a conference by Pope Benedict XVI in which he speaks of the need for natural philosophy to engage questions of evolution and science. This is a theme close to the Pope heart. CNA has a great article summarized below and in full here:

The Science and Faith Foundation will be headquartered at the Holy See under the leadership of Cardinal Gianfranco Ravasi, President of the Pontifical Council for Culture.

The new foundation builds on the work of the STOQ project – Science, Theology and the Ontological Quest – which was created by Pope John Paul II in 2003. For the past 9 years it has promoted a dialogue between theology, philosophy and the sciences working in collaboration with the Pontifical Council for Culture and Rome’s pontifical universities.

Their stated aim is to explore “the possibility of being believers at the dawn of the Third Millennium without renouncing scientific progress.” Together they have initiated study programs and research projects as well as highlighting the fruit of their work through such vehicles as publications and conferences.

One thought on “Science and Faith Foundation”