According to Pope Benedict XVI, the Hunger Games can be understood as a Baptismal journey. Well, that’s not entirely true, I do not know of the Pope mentioning the Hunger Games at any point and I would be surprised if he read the books or saw the movie but… there are some fascinating parallels between his most recent Lectio Divina teaching and the popular teen trilogy.

For those who don’t know much about the Hunger Games, read about it here and here. The author, Suzanne Collins, is openly Catholic though its hard to know how much it is a part of her life and narrative. But there are many interesting elements in the books that fit in with a Catholic world view and offer a platform to critically approach our modern world. Some of these are illustrated in Pope Benedict’s recent talk on Baptism which can be read in full here.

The section of his teaching relevant to the Hunger Games begins when he reflects on the Sacrament of Baptism proper. He speaks about the materiality of Christianity (1), something mentioned before here and here. Then he moves on to the spiritual element of the word which opens the door to a critique of the World of satan and its characteristics  (2), so well depicted in the Hunger Games:

(1) Let us now take a look at the sacramental rite, so that we may understand even more precisely what Baptism is. This rite, like the rite of almost all the sacraments, is made up of two elements: matter — water — and the word. This is very important. Christianity is not something purely spiritual, something only subjective, emotional, of the will, of ideas; it is a cosmic reality. God is the Creator of all matter, matter enters Christianity, and it is only in this great context of matter and spirit together that we are Christians. It is therefore very important that matter be part of our faith, that the body be part of our faith; faith is not purely spiritual, but this is how God inserts us into the whole reality of the cosmos and transforms the cosmos, draws it to himself.Moreover with this material element — water — not only does a basic element of the cosmos enter, a fundamental matter created by God, but also the entire symbolism of religions, because in all religions water has something to say…

(2) The other element is the word. This word is presented in three elements: renunciations, promises and invocations… Let us begin with the first part: the renunciations. There are three and I shall take the second one first: “Do you reject the glamour of evil, and refuse to be mastered by sin?”. What is this glamour of evil?

In the early Church, and for centuries to come the words here were: “Dost thou … renounce the devil and all his works, the vain pomp and glory of the world?”, and we know today what was intended with these words: “the pomp of the devil”. Above all, the pomp of the devil meant the great bloody spectacles in which cruelty became amusement, in which killing men became something to be watched: a show, the life and death of a man. These bloody spectacles, this amusement of evil is the “pomp of the devil”, in which he appears with seeming beauty but in fact, with all his cruelty. However, beyond this immediate meaning of the phrase “pomp of the devil”, there was a wish to speak of a type of culture, a way of life, in which it is not truth but appearances that count; truth is not sought but effect, sensation. And, under the pretext of truth, men were actually destroyed, there was a desire to destroy and people wished to create themselves alone as victorious.

This renunciation was therefore very real: it was the rejection of a type of culture that is an anti-culture, against Christ and against God. The option was against a culture that, in St John’s Gospel is called “kosmos houtos”, “this world”. With “this world”, John and Jesus are not of course referring to God’s creation or to man as such, but to a certain creature that is dominant and imposes itself as if this were the world, and as if this were the way of life imposed. 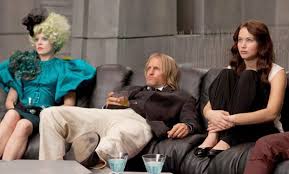 The connection with the Hunger Games now becomes clear. The very title of the book makes reference to bloody spectacles that become amusement to a degenerate culture. Suzanne Collins attributes part of the inspiration to the novel to a moment when she was zapping  through TV channels that showed reality shows and war as a form of entertainment. The Hunger Games were born at this moment. This is the kind of world we are living in, full of the “pomp of the devil”. And this is the world to which the heroine, Katniss Everdeen reacts to with a violent zeal, a reaction proper to someone ‘baptized to the new life’. The condition of this world is unacceptable and should resisted and reacted against. Katniss says “no” to this wold of appearances and evil. She desires the truth.

I now leave each one of you to reflect on this “pomp of the devil” on this culture to which we say “no”. In fact, being baptized means, essentially, being emancipated, being freed from this culture. Today too we know a type of culture in which truth does not count; even if apparently people wish to have the whole truth appear, only the sensation counts, and the spirit of calumny and destruction. It is a culture that does not seek goodness, whose moralism is in reality a mask to confuse people, to create confusion and destruction. We say “no” to this culture, in which falsehood is presented in the guise of truth and information, against this culture that seeks only well-being and denies God. Moreover, from so many Psalms we are familiar with this opposition of a culture which seems untouchable by all the evils of the world, puts self above everyone, above God, whereas it is in fact a culture of evil, a dominion of evil.

Thus the decision of Baptism, of this part of the catechumenal journey which lasts throughout our life, is precisely this “no”, said and acted upon again and again every day, even with sacrifices that are the price of opposing the culture prevalent in many places, even though it is imposed as if it were the world, this world. It is not true. And there are also many people who really desire the truth.

Finally a word on the pessimism of the Hunger Games, perhaps a fall away from its apparently baptismal and Catholic storyline. The final book of the trilogy concludes with a strong pessimistic undertone, with doubts about whether living in this world (the world of Katniss) is really worth it. The hard earned freedom comes with a cost, filled with the scars of battle. The Pope has perhaps a different finale, which also touches on the fundamental question of freedom, but which is illuminated by the realism of hope which comes from the Truth. The issue is posed with a question by the Pope, about whether it is just to baptize a child:

“But can we impose on an infant the religion he should or not live? Shouldn’t we leave this decision to the child?”. These questions show that we no longer see the new life, the true life in the Christian faith but we see a choice among others, even a burden that should not be imposed on an individual without his or her consent. The reality is different. Life itself is given to us without our being able to choose whether or not we wish to live; no one is asked “do you want to be born or not?”. Life itself necessarily comes to us without our previous consent, it is thus given to us and we cannot decide in advance “‘yes’ or ‘no’, I want or I do not want to live”. And, in reality, the real question is: “Is it right to give life in this world without having received an assent — do you want to live or not? Can one really anticipate life, give life without the individual having had the possibility to decide?”.

I would say: it is possible and right only if, with life, we can also guarantee that life, with all the problems of the world, is good, that it is good to live, that there is a guarantee that this life be good, be protected by God and be a real gift. Only the anticipation of its meaning justifies the anticipation of life. And because of this Baptism as a guarantee of God’s goodness, as an anticipation of the meaning, of the “yes” of God who protects this life, also justifies the anticipation of life. Hence, the Baptism of children is not against freedom; it is truly necessary to give it in order to justify the gift of life — that would otherwise be questionable. Only the life that is in God’s hands, in Christ’s hands, immersed in the name of the Trinitarian God, is certainly a good that can be given without scruples. Thus we are grateful to God who has given us this gift, who has given us himself. And our challenge is to live this gift, to really live, in a post-baptismal journey, the renunciations of the “yes”, to live always in the great “yes” of God, and so to live well. Thank you.

No Pope Benedict, thank you.

3 thoughts on “Pope Benedict, Baptism and the Hunger Games”