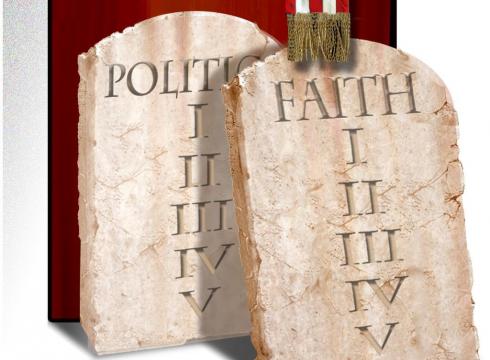 CNA has a great article summarizing Archbishop Gomez’s call to incorporate faith into politics. The current political climate and the hish stakes for believers concerning freedom of conscience and freedom of religion, only serve to illustrate how important it is to hold a position in “unity of life” in which the faith shapes “how we live and act,” and forms the “decisions we make in public life and who we vote for.”  Below a section from the article:

Archbishop Gomez referred to Jesus’ statement that one should “render unto Caesar what is Caesar’s, and to God what is God’s.”

Because Catholics live in the world, we are called to work for the common good of society, to obey just laws, and to respect society and government—that is what we render unto Caesar, he said.

What we render unto God is faith, which means that “we can’t forget about the Church’s teachings and the demands of God’s law when we are engaged in our public life.”

“The most important thing is to form our consciences. We have to make sure our participation and our contributions always reflect the moral and religious values that we find in the Scriptures and in the teachings of our Church,” Archbishop Gomez wrote.

Yesterday, Pope Benedict gave an address to Italian politicians and spoke about their responsabilities. He emphasized above all the importance of politics to protect the human person and the family.

The authentic progress of human society cannot forgo policies aimed at protecting and promoting marriage, and the community that derives therefrom. Adopting such policies is the duty not only of States but of the International Community as a whole, in order to reverse the tendency towards the growing isolation of the person, which is a source of suffering and atrophy for both individuals and for society….The commitment to respecting life in all its phases from conception to natural death – and the consequent rejection of procured abortion, euthanasia and any form of eugenics – is, in fact, interwoven with respecting marriage as an indissoluble union between a man and a woman and, in its turn, as the foundation for the community of family life.

To conclude on a different reflection, one can also consider the importance with which political responsibilities are taken. And while in the USA for example the political climate may be  hostile and belligerent  , it is good to have something to fight for. I recently was made aware of a very different political scenario in Brazil, where Caesar is more of a clown, in fact, he may be one. Here are some images of actual candidates running for the Municipal House in Sergipe, in the northeast of Brazil. Politicians dress up like Batman to Bin Laden, in order to be  remembered and then elected. Pathetic, but this is another side of politics, where Caesar doesn’t seem worth his due. The full article in portuguese is here.

One thought on “Politics and Faith”