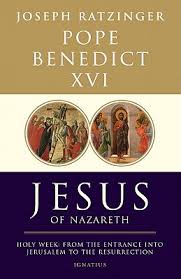 I have commented before on Pope Benedict’s first private book “Jesus of Nazareth” and the environmentally relevant statements found there. In his second volume, there is less content than the first, but still relevant insights none-the-less. In general it is a book filled with spiritual insight on the inner life of Jesus during his Passion. Yet in this light is where words about creation and its place are given.

On speaking about the hour of Jesus, in pg. 54, the Pope explains the act of love of Christ, and how Christ choses, loves and embraces the creational dimension of humanity, and all creation. For Catholics, Creation is ultimately good.

“creation is not a fall, but a positive act of God’s will. It is thus a movement of love, which in the process of descending demonstrates its true nature – motivated by love for the creature, love for the lost sheep – and in so descending it reveals what God is really like. On returning, Jesus does not strip away his humanity again as if it were a source of impurity.”

In a section on Jesus’ high priestly prayer, the Pope explains the inner meaning of creation from God’s perspective. Creation has a greater meaning than itself, that dignifies it further:

Finally, on the final section discussing the resurrection, the Pope mentions the idea that in “consequence of the “revolution in the sicentific image of the world… the traditional concepts of Jesus’Resurrection are to be considered outdated. The Pope contests this view with some interesting questions:

“But what exactly is this “scientific image of the world? How far can it be considered normative? Naturally there can be no contradiction of clear scientific data… What already exists is not called into quested. Rather we are told that there is a further dimension, beyond what was previously known. Does that contradict science? Can there really only ever be what there has always been?…” (246)