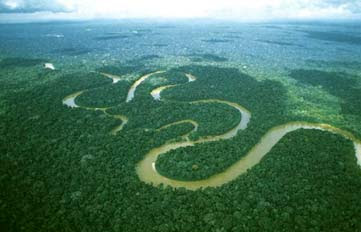 Once again, it seems that the information and data presented by the IPCC on climate change and it’s effects seems to be, in the best of cases… mistaken and incorrect. Below the IPCC claim:

Up to 40% of the Amazonian forests could react drastically to even a slight reduction in precipitation; this means that the tropical vegetation, hydrology and climate system in South America could change very rapidly to another steady state, not necessarily producing gradual changes between the current and the future situation (Rowell and Moore, 2000).

One professor offers the reasons why this data should be discredited and his critiques. Also, it is an example of how carefull we should be of accepting information and the importance of being critical. Here an extract of the conclusions:

The bottom line here? The IPCC did indeed make a claim in its report that is unsubstantiated in the literature that it cited in support of the claim. Further, the specific claim being made also appears to be unsubstantiable — that is, there is nothing in the literature to support the specific claims being made. The IPCC could have said something else — perhaps something even more alarming about the Amazon — but it did not. For the IPCC this degree of sloppiness and lack of attention to accuracy is troubling.

Those claiming that there is nothing to see here are simply wrong — the IPCC botched this one. The various defenses of this issue are an embarrassment. The IPCC simply made a mistake. Pretending that it did not cannot help either the IPCC or the cause for action, and will likely have the opposite effect, as anyone who takes a moment to look at the issue, as I did, will see the same evidence that I did. At the same time, it should also be said that the breakdown here has to do with the fidelity of the IPCC assessment process and not the substance of climate science. That the IPCC botched this particular claim does not make its opposite claim true.

The Amazon error in the IPCC occurred in almost the exact same manner as the 2035 Glacier error. It reflects a lack of attention to detail and accuracy, two criteria that one might think are the lifeblood of a process of assessment. In the end it may simply be an innocent mistake, but a mistake nonetheless. In this respect, both the Amazon and Glacier errors are far less troubling than the issue of how the IPCC has handled disasters and climate change, which goes beyond sloppiness.

One thought on “IPCC blunder – The Amazon”