Like much of Lent, this years Papal Easter reflections have been filled with environmental meaning. On Lent the Pope spoke on nature here and here. At the Easter Vigil Pope Benedict XVI began his reflection with light and creation:

Easter is the feast of the new creation… A new dimension has opened up for mankind. Creation has become greater and broader. Easter Day ushers in a new creation, but that is precisely why the Church starts the liturgy on this day with the old creation, so that we can learn to understand the new one aright. At the beginning of the Liturgy of the Word on Easter night, then, comes the account of the creation of the world. Two things are particularly important here in connection with this liturgy. On the one hand, creation is presented as a whole that includes the phenomenon of time… Creation is therefore directed towards the coming together of God and his creatures; it exists so as to open up a space for the response to God’s great glory, an encounter between love and freedom. On the other hand, what the Church hears on Easter night is above all the first element of the creation account: “God said, ‘let there be light!’” (Gen 1:3).

This new creation, which confirms the goodness of matter gives an entirely new understanding to the first creation. In this sense, a Christian interpretation of the Old Testament must always be seen from the prism of Christ. This is one of the great mistakes of Lynn White Jr. (commented here before) when he claims that Christianity promotes ecological destruction due to the Genesis command to “subdue the earth” and “have dominion”. Both words for subdue and dominion, katakyrion and archetosan, are Christological words that have Jesus as their ultimate paradigm. Christ was the ‘subduer’ and ‘dominator’ by excellence, and this is how he lived it: 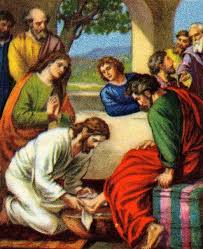 “Who being in the form of God thought it not robbery to be equal with God: But emptied himself, taking the form of a servant, being made in the likeness of men, and in habit found as a man. He humbled himself, becoming obedient unto death, even to the death of the cross” (Phl 2, 6-8). This humbling of oneself, being obedient to God unto death and following God’s order is the Christians’ attitude and understanding of lordship.

On this point Pope Benedict XVI has two very important homilies delivered to the Cardinals earlier this year that speak about the paradigmatic humility of Jesus, who is Lord and yet obedient and humble, powerful yet the opposite of a despot. In his message to the new Cardinals, he spoke of how the apostles fail do understand the logic of the Gospel but hold fast to power and glory. This logic is the same that Lynn White Jr. failed to understand while reading Genesis and what God meant by entrusting ‘dominion’. For what it means according to the Gospel’s logic, see below:

By their request, James and John demonstrate that they do not understand the logic of the life to which Jesus witnesses, that logic which – according to the Master – must characterize the disciple in his spirit and in his actions. The erroneous logic is not the sole preserve of the two sons of Zebedee because, as the evangelist narrates, it also spreads to “the other ten” apostles who “began to be indignant at James and John” (Mk 10:41). They were indignant, because it is not easy to enter into the logic of the Gospel and to let go of power and glory…

Dominion and service, egoism and altruism, possession and gift, self-interest and gratuitousness: these profoundly contrasting approaches confront each other in every age and place. There is no doubt about the path chosen by Jesus: he does not merely indicate it with words to the disciples of then and of today, but he lives it in his own flesh. He explains, in fact, “For the Son of man also came not to be served but to serve, and to give his life as a ransom for many” (Mk 10:45)….According to biblical tradition, the Son of man is the one who receives power and dominion from God (cf. Dan 7:13f). Jesus interprets his mission on earth by combining the figure of the Son of man with that of the suffering Servant, described in Isaiah (cf. 53:1-12). He receives power and the glory only inasmuch as he is “servant”; but he is servant inasmuch as he welcomes within himself the fate of the suffering and the sin of all humanity.

4 thoughts on “Easter and Nature: The Humility of Dominion”