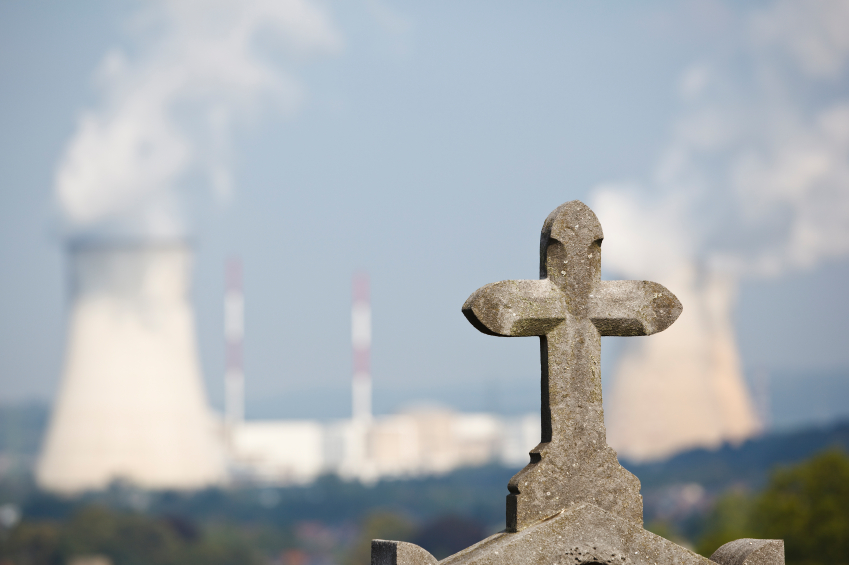 Recently a few articles have come out describing a symposium organized by the USCCB on climate change. The Conference was titled: ““A Catholic Consultation on Environmental Justice and Climate Change: Assessing Pope Benedict XVI’s Ecological Vision for the Catholic Church in the United States,” linked here,  and as NCR reports, it “came about through a partnership of CUA’s Institute for Policy Research and Catholic Studies, the U.S. bishops’ conference, and the Catholic Coalition on Climate Change. Over the course of three days, five panel sessions, and several bishop addresses, the conference highlighted the moral implications of global climate change and environmental justice facing — and affecting — communities across the nation and around the globe.“We have seen the destructive impact of climate change and environmental degradation both around the world and at home,” said Stockton, Calif., Bishop Stephen E. Blaire, chairman of the USCCB Committee on Domestic Justice and Human Development, in a pre-conference statement.

It is hard to comment on the conference itself since the publication with speeches and addresses is not out yet. But… it is worthwhile commenting on the narrative of the articles. The conference, auspiciously it appears for some, happened in the context of hurricane Sandy’s landing on the US East Coast. Here are two examples, from NCR (1), and Famvin News (2). CNS for example is more careful and addresses a certain case in Papua New Guinea, but doesn’t conflate Sandy with climate change(3)

1) The tides following storms such as Hurricane Sandy often bring with them debris from the destruction caused; lately, among tires and treasured items, the coastal waters have pulled two words back into the public sphere: climate change. That climate conversation washed upon Washington Nov. 8, and onto the campus of the Catholic University of America… Dan Misleh, executive director of the Catholic Coalition on Climate Change, said that once-in-a-century storms like Sandy have seemingly become the norm in recent years as ocean waters have warmed, and such super storms reflect scientists’ general findings on climate change, that rising ocean temperatures multiply and feed a storm’s intensity. Having the conference in the wake of Sandy, while not anticipated, brought a real element of climate change to the talks, Misleh said.

2) A day after New York City experienced its worst storm surges in recorded history, Governor Andrew Cuomo and Mayor Michael Bloomberg said the city may need to respond to climate change with steps like storm barriers. Such protections would be extremely costly, but climate change experts said Hurricane Sandy provided a first glimpse of the challenges all coastal areas will face as sea levels rise and extreme weather events become more frequent. Cuomo said on Tuesday that he told President Barack Obama it seemed like “we have a 100-year flood every two years now.” “These are extreme weather patterns. The frequency has been increasing,” he said.

As Catholics we must be careful to embrace what media, politicians and scientists are saying. I have made this case about the IPCC before here. The case that Sandy is an evidence of climate change is by no means settled as I have written in articles here and on a similar claim with hurricane Irene here and here. While some claims about climate change are reasonable and possible, though by all means not proof, others are simply not true. Cuomo’s affirmation that these patterns have increased is wrong. Here is a recent report of climate intensity landfall in the US over the decades and Roger Pielke’s post and comments below: 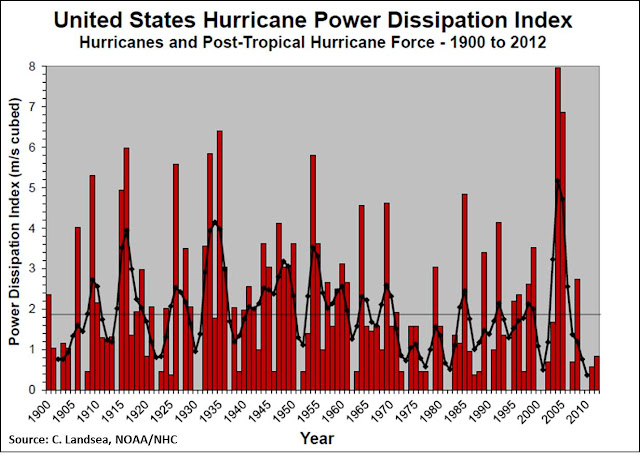 The figure above comes courtesy Chris Landsea of the US National Hurricane Center. It shows the annual intensity of US landfalling hurricanes from 1900 to 2012. The figure updates a graph first published in Nature in 2005 ( Figure 2 here in PDF, details described there).

The red bars show the annual data. The grey straight line is the linear trend (no trend) and the black line shows the five-year average. The most recent five years have the lowest landfalling hurricane intensity of any five-year period back to 1900. By contrast 2004 and 2005 saw the most intense seasons of landfalling storms.
The data shown above includes both hurricanes and post-tropical cyclones which made landfall at hurricane strength (i.e., storms like Sandy). In addition to Sandy, there have been 3 other such storms to make landfall, in 1904, 1924 and 1925. The addition of the storms does not make a significant impact on the graph.

One thought on “Catholic Symposium on Climate Change… and Hurricane Sandy”