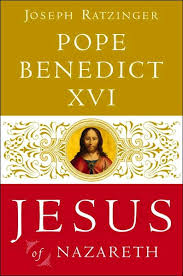 Pope Benedict XVI is on vacation in Castel Gandolfo and is using it to do some writing. CNA reports:

“Pope Benedict XVI’s vacation time is now being dedicated to writing the third volume in what could safely be called the “Jesus of Nazareth” series. The new work will seek to shed light on the story of Jesus’ childhood from the Gospels.”

His first book on Jesus’ public ministry contained some gems with regards to a Catholic approach to the environment and development. See some extracts below:

[Western Aid] ‘purely technically and materially based… has left God out of the picture [and] has driven men away from God’ is in fact responsible for the situation of disparity turning the ‘“third world” into what we mean today by the term. It has thrust aside indigenous religious, ethical and social structures and filled the resulting vaccum with its technocratic mindset. The issue is the primacy of God’‘

‘the peoples of Africa, lying robbed and plundered, matter to us. Then we see how deeply they are our neighbors; that our lifestyle , the history in which we are involved, has plundered them and continues to do so… Instead of giving them God, the God who has come close to us in Christ, which would have integrated and brought to completion all that is precious and great in their own traditions, we have given them a cynicism of a world without God in which all that counts is power and profit, a world that destroys moral standards so that corruption and unscrupulous will to power are taken for granted. And that applies not only to Africa.’

‘Such pride makes man violent and cold. It ends up destroying the earth.’

‘Once sin has been overcome and man’s harmony with God restored, creation is reconciled, too.’

Hopefully the next two volumes will have more insights into the environment and our relationship to it.