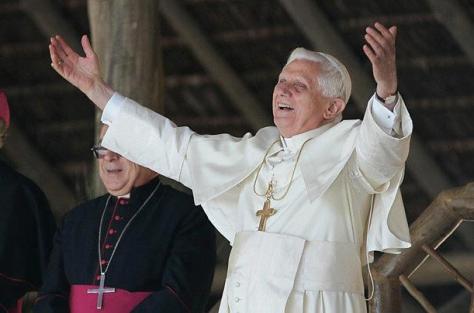 I would like to wish many blessings to Pope Benedict XVI today as his first day as Pope Emeritus, who has given so much wonderful food for thought and wisdom for this blog and above all to Catholics and people of good will around the worl,. Most of my posts on this blog have been focused on his messages, and they have inspired many other reflections. Of all articles flooding the media these days, this one is the best in my opinion, by Alice von Hildebrand. With her I say, “Thank You Pope Benedict XVI!’

On her account of Benedict, von Hildebrand says the following, which is relevant to the environment with regards to the role of beauty:

Benedict XVI is shy: For him these endless meetings and encounters with “famous” personalities, heads of states, etc. were clearly nothing like penance. But it is my personal conviction that he knew he could transmit a message that completed the one of his predecessor.
More than the latter, he had an extraordinary sense for the sacred value of tradition – the golden cord linking us to the past, as Plato put it. He felt keenly that “modern man,” inebriated by his mind-boggling technological discoveries, was losing sight of a precious heritage that is never old  because rooted in eternity. His superb artistic background – particularly in music – (a domain in which he certainly has not only a remarkable knowledge, but also a talent as a pianist) – made him aware that “modern culture” was in fact an anti-culture, and that a society in which the youth is fed on Rock and Roll was being given a subtle poison. In the Republic, now close to 25 centuries ago, Plato mentioned that “decadence begins in music. This is certainly what took place immediately after the end of World War II. Truth when cut off from Beauty tends to become abstract; it must be “incarnated.” From its very beginning Christian art, which has blossomed so magnificently in Europe, has taught the faith to millions of little children. Much of modern youth is fed on ugliness; and the Devil is its incarnation.

The vicious attacks on the sacred Tridentine Mass, the horrible architecture of some “modern” churches, sometimes copying a gym, the deafening noise (called music), the lack of reverence in religious ceremonies, were things which Benedict XVI clearly perceived were preventing young people from finding their way to their Mother the Church and perceiving the loving tenderness of Her message. He whose background in the beautiful baroque Catholic culture of Bavaria, had fed him on sacred beauty since his very baptism heard a call: make them aware of the unity of Truth, Goodness and Beauty; all incarnated in the Catholic Church through Christ.

Among the last messages of the Pope in February, were his reflections on the theme of truth and beauty, fruit or his spiritual exercises directed by Cardinal Ravasi. These are some of the Pope’s words:

The “Logos” is not only mathematical reason: the “Logos” has a heart, the “Logos” is love. Truth is beautiful, truth and beauty go together: beauty is the seal of truth. And, nevertheless, you, through the Psalms and through our daily experience, also firmly stressed that the “very beautiful” of the sixth day – spoken by the Creator – is permanently contradicted, in this world, by evil, by suffering, by corruption. It seems that the evil one wants permanently to stain creation, to contradict God and to make his truth and beauty unrecognizable. In a world so characterized also by evil, the “Logos,” the eternal Beauty and the eternal “Art,” must appear as a “caput cruentatum” (bloody head). The incarnate Son, the incarnate “Logos,” is crowned with a crown of thorns; and nevertheless, precisely in this way, in this suffering figure of the Son of God, we begin to see the most profound beauty of our Creator and Redeemer; and yet we can, in the silence of the “dark night,” hear the Word. Believing is nothing other than touching the hand of God in the darkness of the world and thus, in silence, to hear the Word, to see Love.

Again we see the relationship of truth and beauty. Once again these themes connect us to the mystery of creation, and also of sin which lead one to Christ, the Reconciliation. The psalms deeply speak about these realities, and express the hope in reconciliation to come. The theme of beauty and nature has been explored here and here.

One thought on “A Tribute to Pope Benedict XVI”